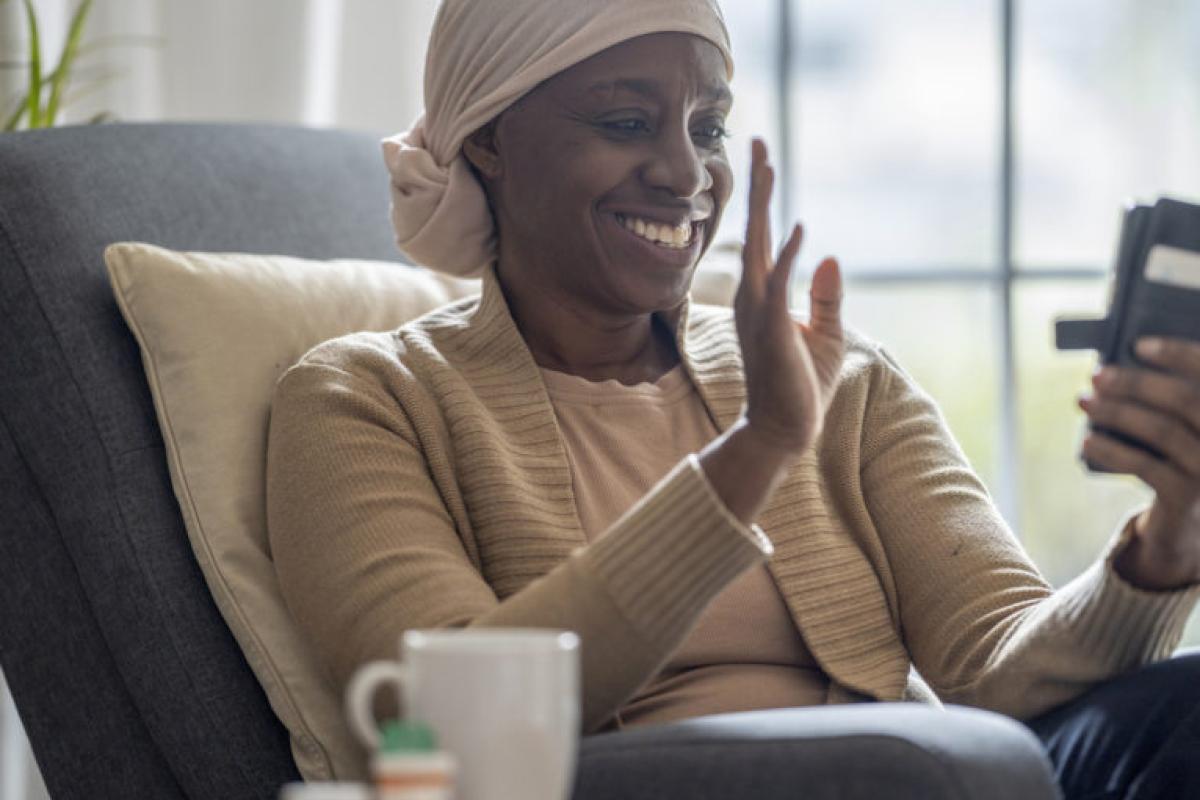 The UVA Cancer Peer Support Program has 24 volunteers who offer support to cancer patients and their families.

Support from family and friends is crucial after a cancer diagnosis, but they often can’t truly relate to the highs and lows of living with the disease. Only someone who’s been down the same road knows how it feels to receive a lifechanging diagnosis, how to manage the stress and side effects of treatment, how to navigate setbacks, and keep pushing forward in spite of it all.

The UVA Cancer Center Peer Support Program aims to help cancer patients connect with someone who has this shared experience. For 63-year-old Gigi O’Donnell, that someone is Agnes Frankfurter.

“Agnes is awesome. She helps boost my morale. She tells me how strong I am, and I need to hear that right now,” says Gigi.

When Listening Becomes a Lifeline

Agnes and Gigi have lung cancer in common. Gigi was diagnosed with stage 4 lung cancer in 2019, and is receiving regular chemotherapy to keep the disease from advancing. Eighty-one-year-old Agnes is in remission and has reached the 5-year mark since her diagnosis.

The pair discovered this common thread was just the icebreaker. “Soon after we began speaking, I realized our conversations had little to do with her cancer,” says Agnes. “Even though I began all of our calls asking how she’s feeling, it quickly evolved into what’s going on in her life. And to be honest, I wasn’t sure I was helping.”

In fact, Agnes was giving Gigi exactly what she needed. “I struggle with anxiety. My biggest fear is dying. I have a 2-year-old grandson who lives in Oregon, and I would like to be around longer to see him,” says Gigi. “Also, I lost my husband in November and I have no family here in Virginia, so I feel very alone. Talking to Agnes makes me feel so much better.”

“After about two months, Gigi shared with me that she thought talking to me had helped her sleep better and had helped with her panic attacks,” says Agnes. “After I got off the phone, I went in and talked to my husband and I started to cry. Here I am feeling frustrated like I’m not being helpful. But this made me realize that some people don’t need to talk about their disease all the time. They just need someone to listen."

The Cancer Peer Support Program has 24 peer partner volunteers like Agnes — some cancer survivors and others caregivers — who completed a 12-hour training course. They learned how best to support UVA Cancer Center patients and their families at every phase in their cancer journey, from diagnosis to recovery and beyond.

“Our program volunteers do not provide any medical advice,” says Program Coordinator Mary Burton. “This is a big part of the training. They learn just to listen and offer emotional support.”

“One of my early concerns about doing the program was that we’re not to give advice. I’m a retired nurse, and that’s what I’m used to doing,” says Agnes. “I thought that was going to be hard for me. But we focused a lot on communication skills during our training, on listening and asking the right kinds of questions. I learned a lot of skills that have been beneficial for me not just as a volunteer, but for everyday.”

Another takeaway for Agnes: her cancer journey wasn’t entirely behind her. “When I got my cancer diagnosis, I shunned every opportunity for support. I didn’t feel I needed it. I had family and friends who were supportive, and I tend to like to deal with things on my own,” she says.

“But after the volunteer training, I felt it was therapeutic for me to be with people who had had a cancer diagnosis. We each had a different experience, but it resonated. I felt like part of a group. It was good for me to hear what other people went through.”

Cancer Support When You Need It

Participants in the Peer Support Program connect by email and phone calls due to COVID. This virtual format has opened the program up to participants across Virginia who receive treatment at UVA Cancer Center.

Agnes lives in Charlottesville, but spends winters in Florida, while Gigi is in Louisa. The two women have been speaking once a week since June.

“This free program is participant-driven, so the patient determines how often and how long to continue the relationship,” says Joncey Boggs, a patient support advocate and Peer Support Program trainer. “Some participants may just have one question about resources in their area and no longer need support beyond that initial meeting.”

Of course, some connections last much longer. “I’ve really gotten to know Gigi over the last 8 months as a person — an interesting person, a strong person,” says Agnes. “It’s like talking to a friend every week.”

Help transform the future of healthcare by making your gift to UVA Cancer Center or contacting Corley Raileanu, Executive Director, Cancer Programs at 434.243.3480 or corley@virginia.edu.

The first shipment of what will be a total of 20,000 facemasks, coordinated by Charlottesville-based 2003 Darden graduate Jerry Peng, arrived Thursday.